Beautiful architecture of Podhale attracts more and more guests every year. Highlander houses in Zakopane have become a very popular option for accommodation for a dozen or so people. It is a great alternative for larger groups seeking private leisure. A common space in which everyone can meet and spend time together favors the tightening of family ties. For those seeking peace and rest, there will also be a place where you can hide. If the house is built in a traditional highlander style, you can also explore the beautiful wooden architecture that has been unchanged for years. In our house you will find all the beautiful details that characterize the traditional buildings of Podhale; wooden amphibians, sculpting on scallops or a charming veranda where in summer you can drink coffee while looking at the panorama of the Tatra Mountains.

The oldest cottages in Podhale come from the beginning of the 19th century and are located in Bystre and Koziniec. Later, buildings on Kościeliska Street in Zakopane began to be built. A traditional highlander house was made of spruce wood, although there were also larch or fir trees. It was built of amphibians, or trunks of trees cut along the length that were laid at the edge.

The gaps between the trunks were sealed with moss and later with Woolen. Sloping roofs were covered with shingle. The house had two ‘black’ and ‘white’ chambers. In the first there was a kitchen, in which there was no chimney at first, which caused a black coating on the walls. That is why her name came from. In white, valuable objects were stored. This was also the place where family celebrations were held. Between these rooms there was a hallway in which household appliances were often left. From the western side, farm buildings where build like cowshed, barn or storeroom. Materials for their construction were usually of inferior quality. 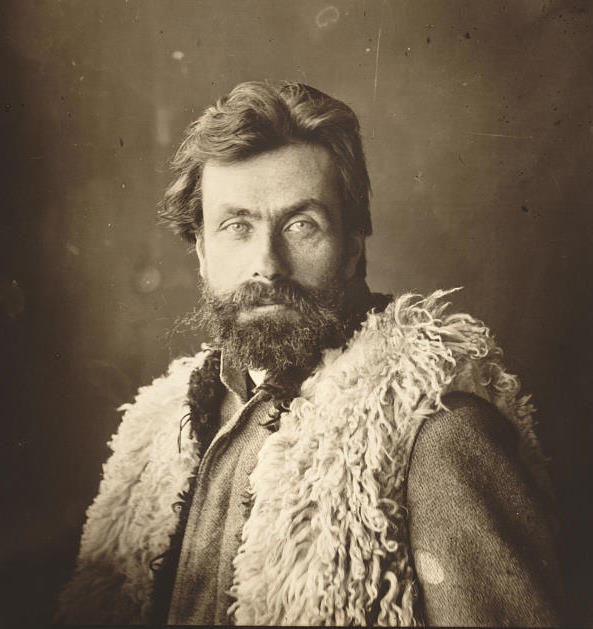 Over time, Zakopane became more and more popular and the number of residents grew. The first house built by the visitor was Walery Eliasz Radzikowski-home. His building was in the Swiss style. In subsequent years, more villas modeled on the Austro-Hungarian spa buildings were built. The Zakopane style was initiated and promoted by Stanisław Witkiewicz, who lived in Zakopane at the end of the 19th century. Witkacy’s son – artist, theoretician of art and self-taught in architecture was fascinated by highlanders’ craft. In the houses he designed, he used Podhale’s details to which he added elements of secession. The first cottage – Willa Koliba- designed in 1892, to this day we can admire the street Kościeliska in Zakopane. The project was created for Zygmunt Gnatowski.

Witkiewicz has extended the highlanders’ house consisting traditionally of a bicameral chamber in such a way that it would serve rich guests. Houses were built on foundations consisting of broken stone. Due to the terrain, they could have different heights. The roofs were sloping and the walls were constructed of amphibians. They could be single or double-bay; In the latter, instead of cells or pantries, there were additional chambers. Such buildings were characterized by richer homes. In the following years, more houses and guest houses were built, mainly for visitors, including Pepita, Skoczyska, Staszeczkówka, Oksza, Zofiówka, Nałęcz, Pod Jedlami and others. Many imitated the Zakopane style; among others, Tadeusz Prauss designed a hostel on the Morskie Oko Lake, Jan Witkiewicz-Koszyc created the villa Witkiewiczówka and Hut in Nałęczanów for Stefan Żeromski. The Atma project was also created – Józef Kaprusia – in which now is the Karol Szymanowski Museum, Orkanówka by Andrzej Galicy (Poręba Wielka). Buildings in this style were also created outside of Podhale. In Wisła, Bogdan Hoff’s buildings were created, such as Słoneczna (for Hendryk Dynowski), Zacisze (for Juliusz Bursche) and villas for Julian Ochorowicz. The villas of Konstancin, Anina, Łódź and even Lithuania were also built. or in the Russian partition. Architect’s designs have become more and more popular, especially among intelligentsia and art people; The Zakopane style became a synonym of the national style. There was an erroneous view that the elements of native Polish Slavic architecture survived in the folk art of Podhale. 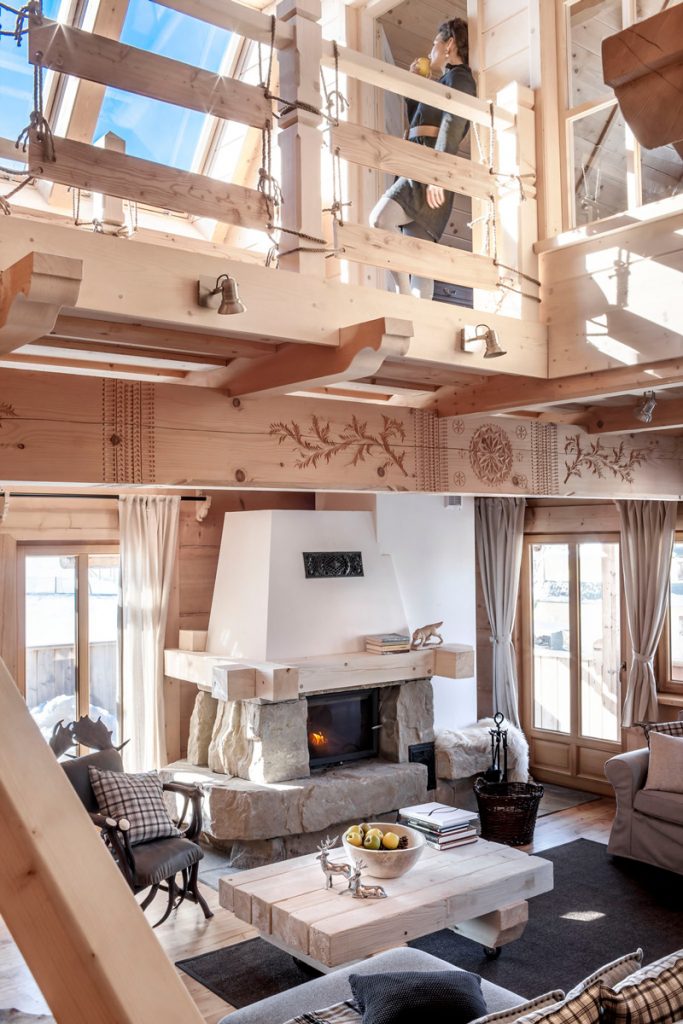 In his projects, Witkiewicz used a lot of highlander elements such as pazdury on the roofs, sunshine on the tops, windows or doors or amphibians (coals protruding beyond the outline of the house). These elements were traditionally decorated with floral motifs. In addition, under the extended eaves, he placed verandas directed to the south side. In the attic he designed small rooms – ‘wyględy’. They resembled buildings of a shed and shacks in which hay was placed under the roof. This style also created interior furnishings such as furniture, household appliances, musical instruments and costumes. The Zakopane style is not only architecture or furniture, but also elements of culture, such as music or writing. In our Villa you will find many elements or details of the regional style. In the living room, you can admire a richly carved pine, a beam with regional patterns. A stone fireplace with comfortable sofas form the center of the living room. Beautiful open,wooden stairs lead to the second floor. From the living room you can go also out onto a large terrace from which the stairs lead straight to the garden. The gutters are made of roots and the roof is traditionally covered with black painted shingles. Decorations are complemented by antique exhibits such as wooden skis or highlander’s items. Welcome !!! 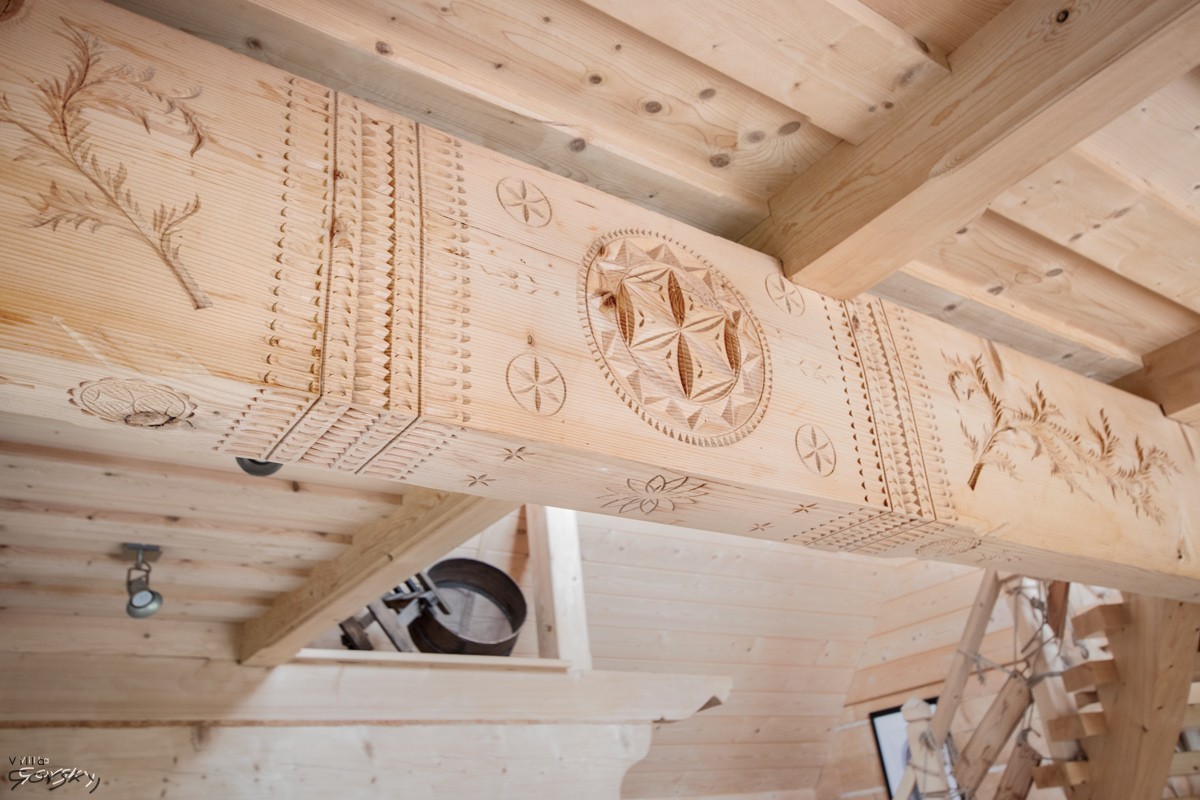 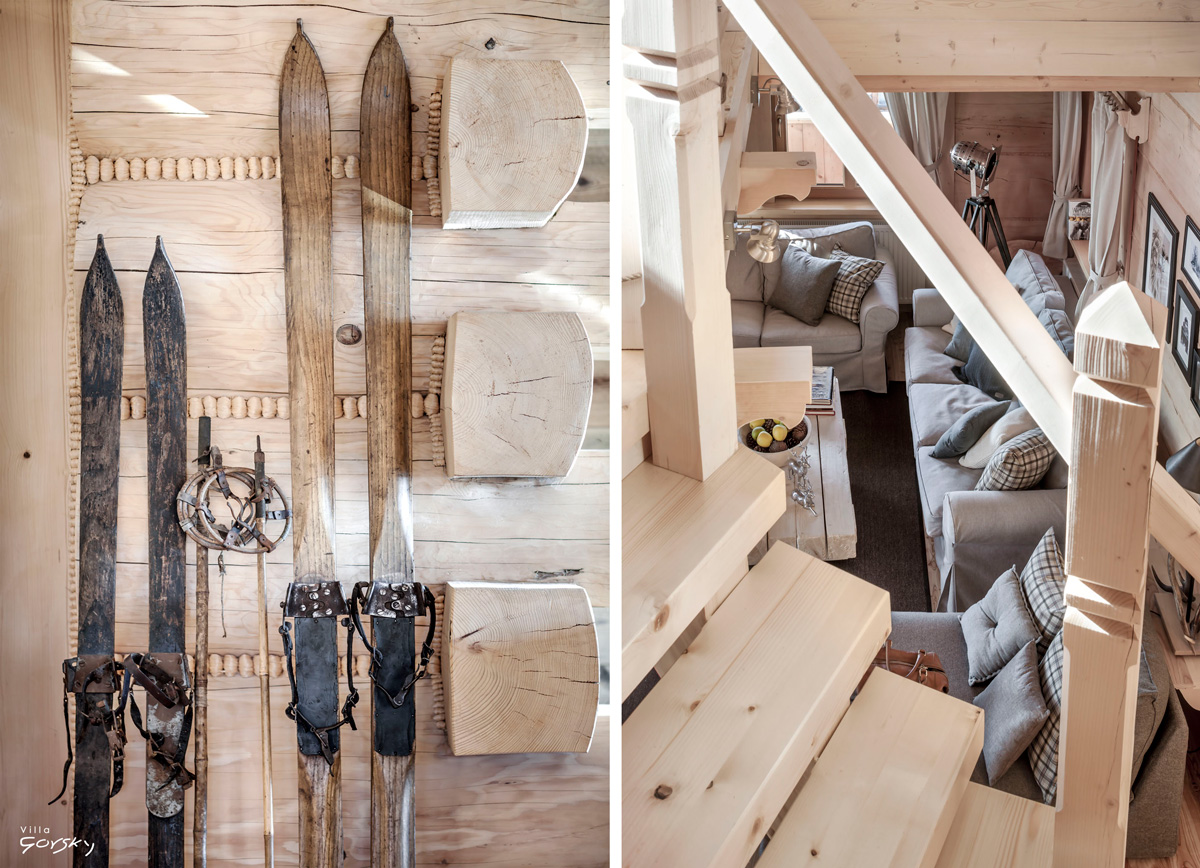